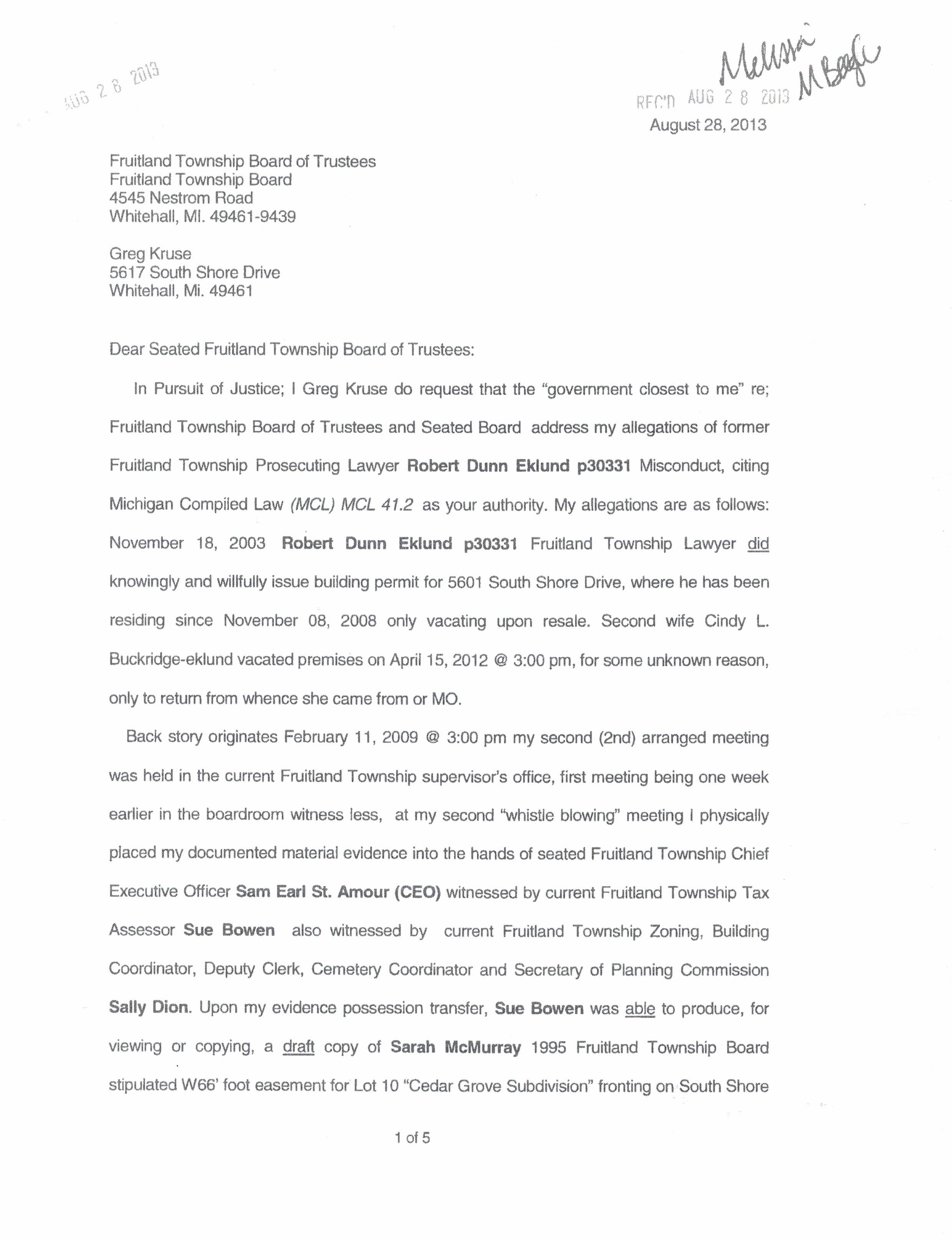 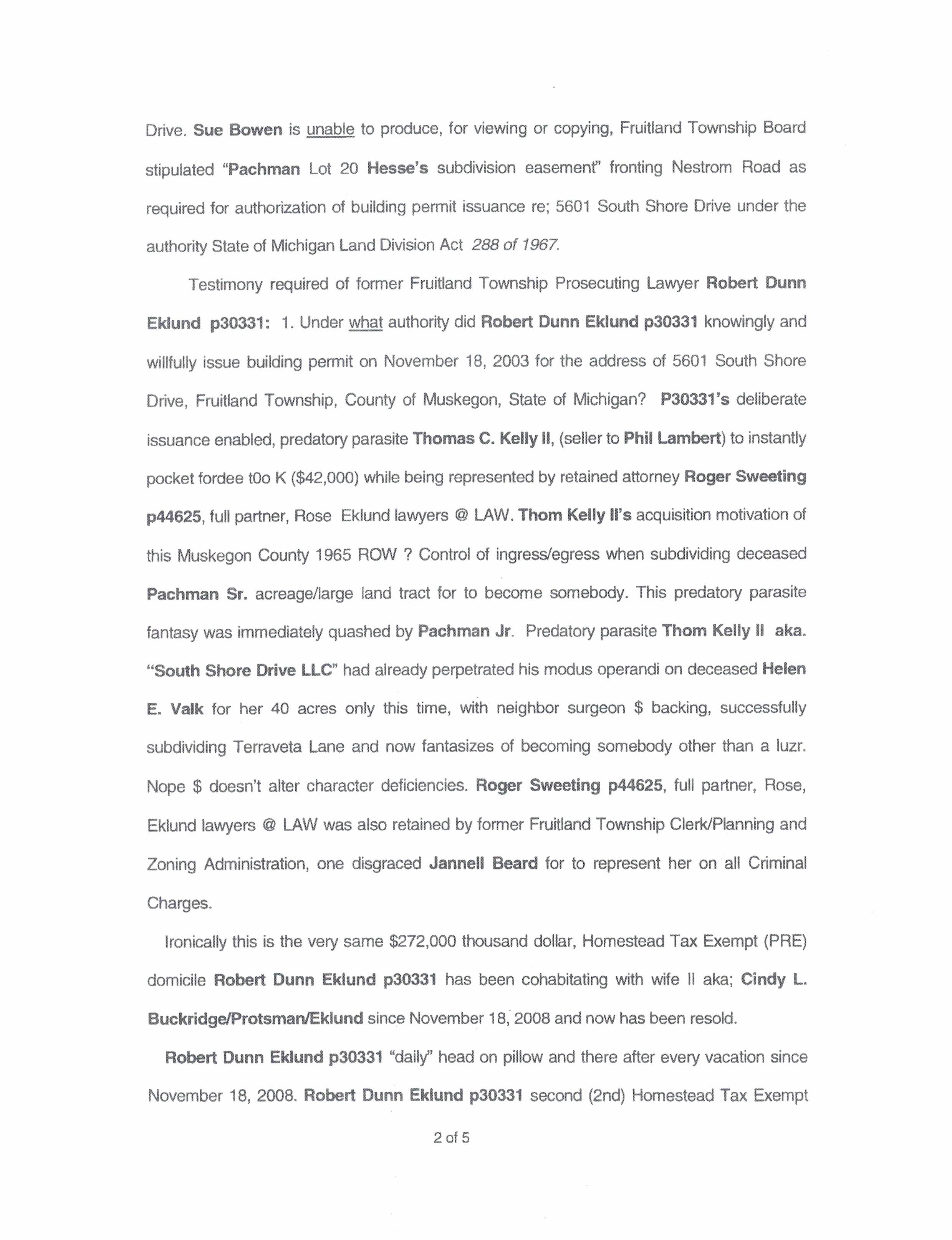 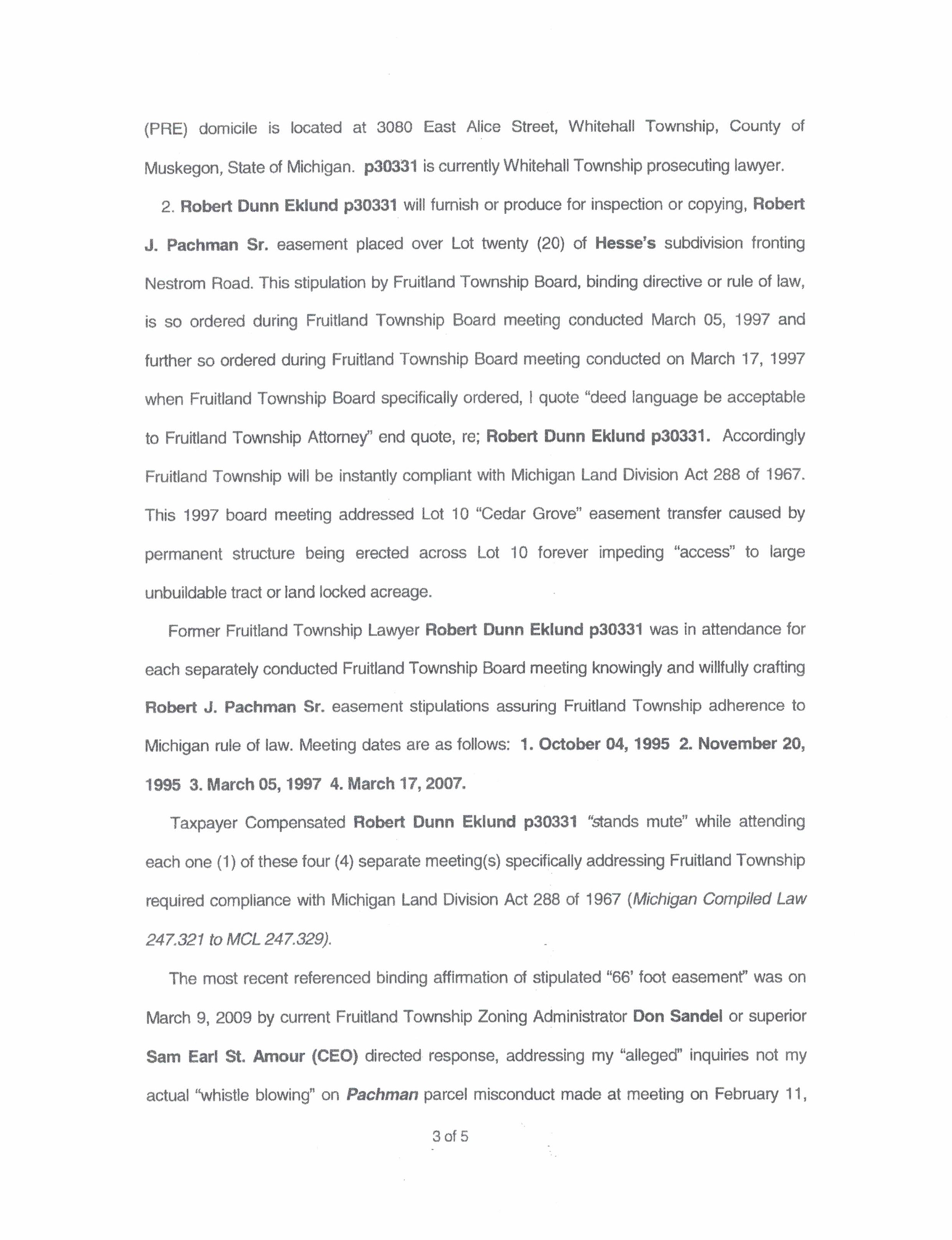 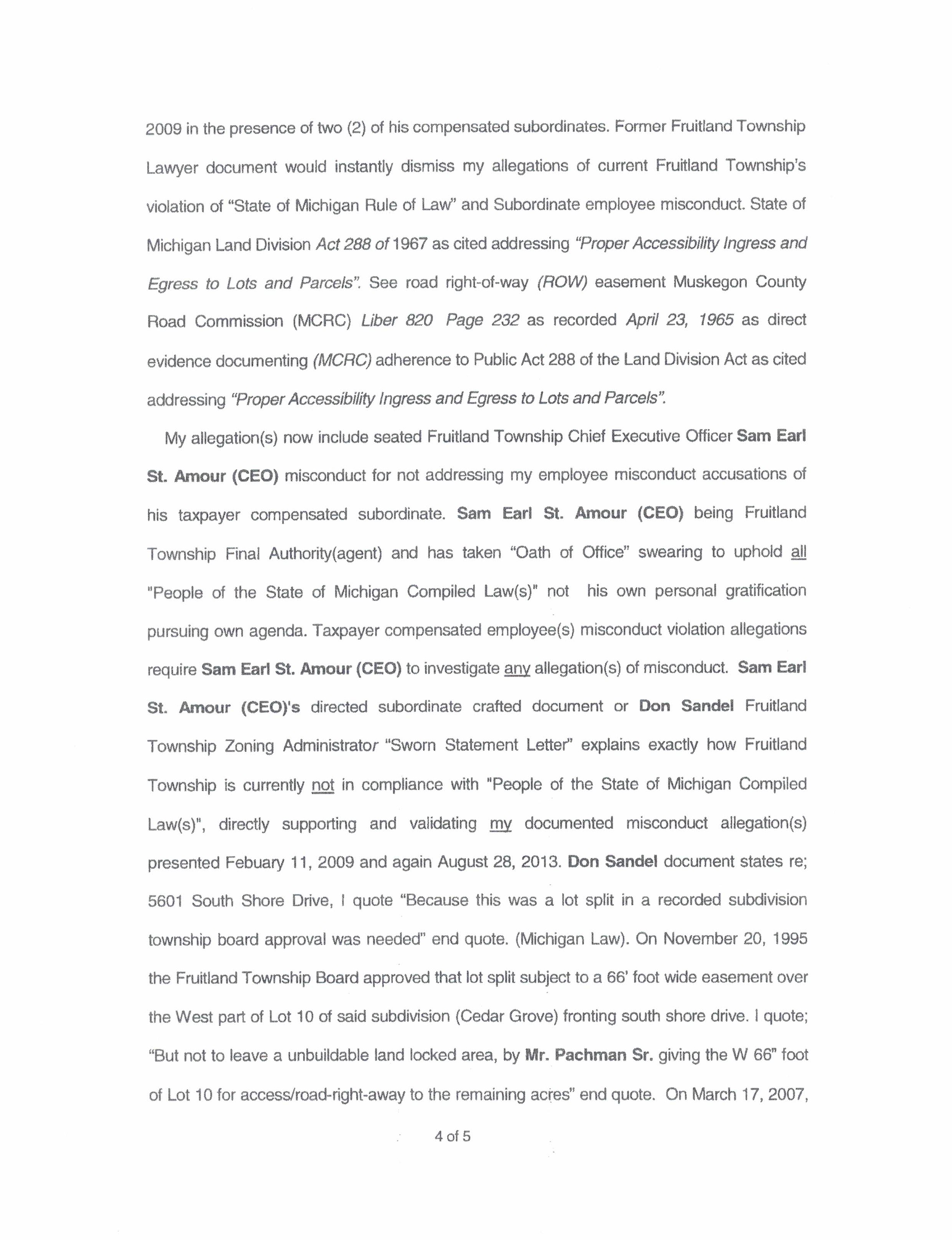 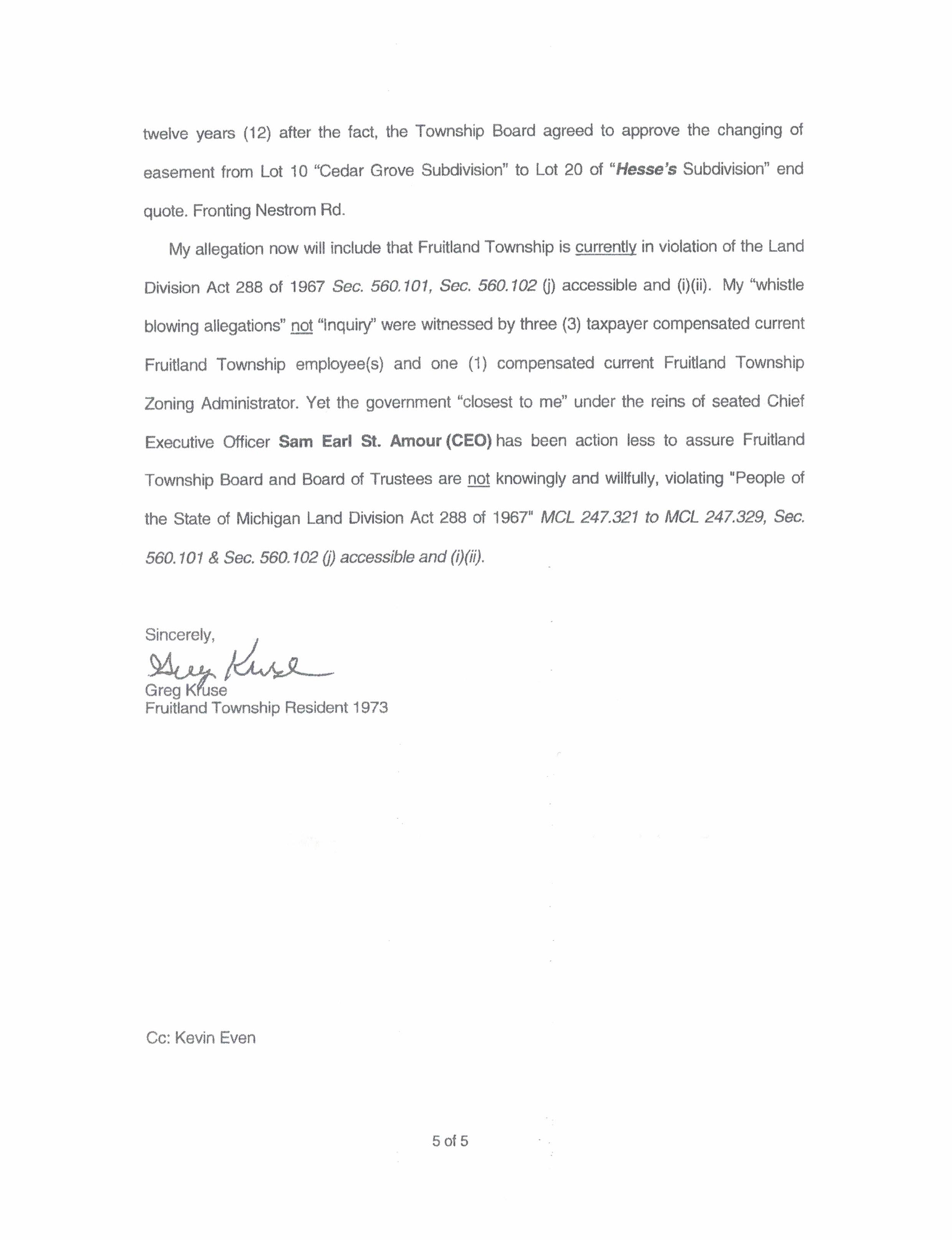 In Pursuit of Justice; I Greg Kruse am requesting that the government closest to me re; Fruitland Township Board  investigate my allegations of Fruitland Township At Will Prosecuting Attorney Robert Dunn Eklund PLC p30331 misconduct, citing Michigan Compiled Law (MCL) MCL 41.2  as your authority.

My allegations are as follows: on November 18, 2003  Robert Dunn Eklund PLC p30331 Taxpayer Compensated Fruitland Township Attorney or Agent did knowingly issue building permit for the address of 5601 South Shore Drive where he has been residing since November 08, 2008, but suddenly removed his personal possessions from this property on April 15, 2012.  While attending my February 11, 2009 @ 3:00 pm second (2) arraigned meeting at the current serving Fruitland Township Supervisors office, first meeting being one week earlier in the board room witnessless, at second meeting I deliberately placed my documented material evidence into the hands of Fruitland Township Chief Executive Offer Sam Earl St. Amour (CEO), in the presence of, Fruitland Township Tax Assessor Sue Bowen and also in attendance was Fruitland Township Zoning, Building Coordinator, Deputy Clerk, Cemetery Coordinator and Secretary of Planning Commission,  Sally Dion. Upon my evidence possession transfer, Sue Bowen was able to produce, for viewing, a draft copy of Sarah McMurrays 1995 Fruitland Township Board stipulated 66 foot easement for Lot 10 Cedar Grove Subdivision fronting on South Shore Drive. Sue Bowen was unable to produce, for viewing,Township Board stipulated Pachman Lot 20 Hesses Subdivision Binding Easement nor is there any evidence of easement ever being Legally recorded thus enabling building permit for 5601 South Shore Drive issuance under authority by State of Michigan Rule of Law.

Pachman easement would exist within the realm of public record. Pachman easement document does not necessitate a Freedom Of Information Act (FOIA) request being filed by any entity. Act No. 442 of the Public Acts of 1976, as amended, being sections 15.231 to 15.246 of the Michigan Compiled Laws.

Mr. Sandel Fruitland Township Zoning Administrator document states re; 5601 South Shore Drive, I quote Because this was a lot split in a recorded subdivision Township approval was needed (State of Michigan Law). On November 20, 1995 the Fruitland Township Board approved that lot split subject to a 66 foot wide easement over the West part of Lot 10 of said subdivision (Cedar Grove). In March 17, 2007 the Township Board agreed to approve the changing of easement from Lot 10 Cedar Grove Subdivision to Lot 20 of Hesses Subdivision end quote.

My allegation includes that Fruitland Township is currently in violation of Rule of Law or the Land Division Act 288 of 1967 Sec. 560.101, Sec. 560.102 (j) accessible and (i)(ii).  My allegations were witnessed by several (2) taxpayer compensated Township employees and one (1) compensated Township Zoning Administrator. Yet not one person has attempted to do ANYTHING or conducted any investigation by the government closest to me under the rein of current serving Chief Executive Officer Sam Earl St. Amour (CEO) 2008-2012 to ensure Fruitland Township is NOT Knowingly Violating "People of the State of Michigan Compiled Law(s)" MCL 247.321 to MCL 247.329. What about oath of office? Whos  Rule of Law? What about the Taxpayers rule of law? What about Cronyism? What would CEO DO for a Klondike Bar? Would you Violate Rule Of Law for your BFF?  Would Twelve independent separate competent individuals all come to the same conclusion? You can decide on your own.

Pleading Ignorance or Incompetence is not a permissible valid defense in a court of law, civil or criminal.

Brought to you by our friends with karma

The material on this site may not be reproduced, distributed, or otherwise used, except with the prior written permission of shooedr.